I thought last week was busy for items arriving but this week was on par if not greater. A number of the items that I've decided to purchase do not necessarily fit in the "must have" category. But somehow I seem to have convinced myself that I need them. Either for this total eclipse or for other projects that I'm looking to undertake in film and photography. The damage is done now, the credit card is still smoking, so let me take you through the latest. 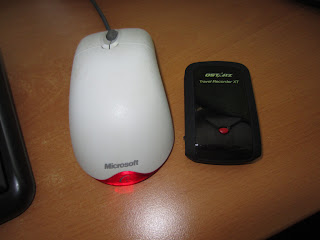 For locaton and timing accuracy I've decided to go with a Bluetooth USB GPS dongle. Whilst there were same bare bones versions, I opted for one that can do data logging which is great for trips and geotagging photos. The make and model is the Qstarz BT-Q1000XT-F. I've included a picture of the device next to a standard mouse for reference. I'll post a video eventually of the unboxing that I did, but first impressions? It does what it says.

I was able to get it working relatively easily with both my main computer via USB and a Asus Eee PC via BlueTooth. The main application that I wanted to verify was Eclipse Orchestrator and that worked perfectly. The suggested clock error being detected was well within the suggested range by the creators of the application. One downside I found is that only one application at a time can access the information. This could be down to the use of the serial comm port interface. To be honest that is not an issue for what I want to use it for. 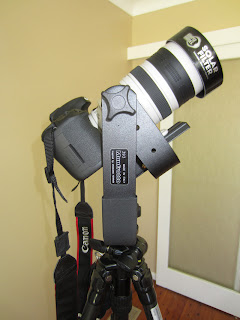 In addition to the GPS dongle, a package from Rainbow Symphony arrived. The package took only four days to arrive in Sydney from California. I had purchased a variety of solar filters for the video and DSLR cameras and for good measure, 25 solar filter glasses. These might be handy to have for people who are not prepared and leave it to the last minute to secure. Added to a number of eclipse glasses I have left over from the 2004 Venus Transit I should be able to make some people happy. Here is a shot of the video and DSLR cameras all setup. 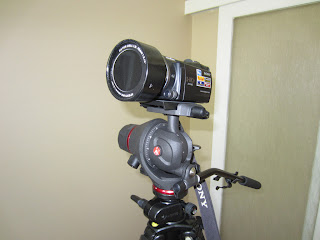 One additional purchased that I hadn't necessarily counted on but thought it would be a great idea to have one lying around, was a video fluid head. Manfrotto have a few that I liked and this one was reasonably priced when sourced from somewhere like B&H Photo and Video. The model # is MH055M8-Q5 Photo-Movie Tripod Head. Very nice design though a touch heavy being made out of magnesium. Added to the tripod head I bought some bags for my Giottos MTL-8360B's, a padded bag for the Manfrotto 393 and a Think Tank Pixel Sunscreen.

So all of the large purchases are now done and have been delivered. I am glad that I didn't leave it too late and be disappointed in the final weeks.Next weekend will be big as we start to approach the last full moon at which point I'll take the opporunity to check sample exposures. Theoretically speaking the DSLR should be OK but I want to make sure that I know the correct setting for the video camera (Sony CX700) for ideal exposure. On auto exposure the gain is too great and I won't get to film any subtle detail.

In the next three and a bit weeks to go I'll be practising setup and configuration followed by a number of trial runs. Will keep you informed of my progress.
Posted by neggleston at 3:55 PM No comments:


This week a number of packages have arrived that I've been eagerly awaiting. This includes 2 sets of Giottos MTL8360B carbon fibre tripods along with a Giottos 1311-656 ball head. Added to this I also opted to get a Giottos tripod bag, the AA1253. Unfortunately was only able to get one and the back order was 6 weeks. Looking into some options there but the bag itself is very nice. 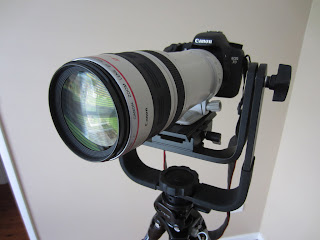 Then last Friday I picked up the Canon EF 100-400mm f/4.5-5.6. So Friday night I had a lot of fun opening up boxes and packages and putting it all together. Here is a picture of the lens mounted on my EOS 7D and then attached to the Manfrotto 393 gimbal mount. It really is a beautiful sight.

Given the amount of research that I've performed, YouTube videos that I've watched I was very familiar with how it was going to behave and I think it is going to work perfectly for me.Tightening the tension knobs allowed me to find the sweet spot to be able to move the camera to different angles and it just stayed there. I still need to get it outside and test it properly.

So since my last post about a week ago there has been a few other purchases. This includes some more Giottos tripod bags, a bag for the Manfrotto 393 and also a Manfrotto fluid head video tripod head. I've sourced these again from B&H Photo and Video so that should arrive in the next week or so. Everything appears to be in stock so shouldn't be any suprises for delivery.

I've also purchased the filters for both the DSLR and video camera. They are in route and hope to have them available soon.

Whilst I've been waiting for kit to arrive I've been trying to do as much reading about eclipse photography. I've since found a good a good presentation by Steve Russell and can be found here (http://www.asnsw.com/node/854). Titled "Astroimaging - Total Solar Eclipse Workshop" he covers off how to shoot, what to shoot, lessons learnt etc.

Amazing to believe it's only one month to go!
Posted by neggleston at 10:41 PM No comments:

Kit starts to arrive for Solar Eclipse in November 2012


In my last post I talked about the the type of kit I was looking at so that I can shoot the upcoming eclipse in Far North Queensland. Since then I've made some decisions and placed some orders. Now it is just the waiting game for everything to arrive.

For the lense I opted for the Canon EF 100-400mm f/4.5-5.6L IS USM. This will get me close to the action whilst providing me with some other options later on for the use of telephoto. There is an Avalon Air Show in Melbourne that I intend to get to next year and have heard this is a great lense for capturing it. The lens is being sourced locally in Australia and spoke with the retailer last week. Should arrive in the next week or so. To support and mount the lens on the Canon 7D I went with the Manfrotto 939 Gimbal mount. This was sourced from B&H Photo and Video in New York. On this expedition I not only want to shoot stills I also want to capture video. I believe video offers me the opportunity to capture not only the event itself but the reactions of people in and around. I am hoping to capture screams, cheers and high fives. To do this I am going to use my Sony CX700 Full HD HandyCam video camera. This is such a great little unit and the quality of images is superb. Like the telephoto lens my plan is to get as close to the action as possible. In this case I've opted for a Sony VCL-HG1737C 37mm 1.7x High Grade Telephoto Converter Lens. This was also sourced from B&H Photo and Video.

As I mentioned before the Canon lens will arrive shortly. The gimbal mount and teleconverter took about one week to arrive from the US via UPS. Not bad really.

So what else do I need to get? One thing that I've been lacking over the years is a decent tripod. I have a Manfrotto 190XPROB and thought I've seen some posts around taking the head off it seems a touch painful. Instead I want something that is light and allows attachment of a ball head or the gimbal mount in this case. There have been a couple of sales on lately for Giottos so have placed an order for two sets of tripod legs and another ball head to match the Giottos 1311-656 that I already have.

One final purchase will be filters for the lens. I'm looking at a couple of options there but that will do it from a hardware perpective. Once I've got everything I'll post some pictures and maybe a video or two.

Posted by neggleston at 10:21 AM No comments: